Argentina is poised to become a growing leader in lithium production. The country’s government is actively encouraging foreign investment and renewable energy initiatives. Recently, the country’s administration announced an intention to increase Argentina’s production of lithium from 40,000 metric tons to 230,000 metric tons by the end of 2022. Today, Argentina is one of the top five global producers of lithium and hosts approximately 60 percent of known lithium reserves.

Argentina is home to a sizable share of the prolific Lithium Triangle, the largest resource of lithium in the world. Approximately half of the world’s lithium supply comes from the Lithium Triangle that spans Chile, Bolivia and Argentina. Some believe that the Triangle could host additional discoveries, specifically in Argentina. With the demand for lithium is expected to grow at a CAGR of 14.8 to reach a market size worth $8.2 billion by 2028, opportunities in Argentina’s Lithium Triangle may present an exciting opportunity for investors.

Argentina Lithium and Energy (TSXV:LIT, OTC:PNXLF, FWB:OAY3) is a mineral exploration company focused on developing a portfolio of highly prospective lithium projects in Argentina. The company is a member of Grosso Group Management which is a resource management group that has pioneered exploration in Argentina since 1993. 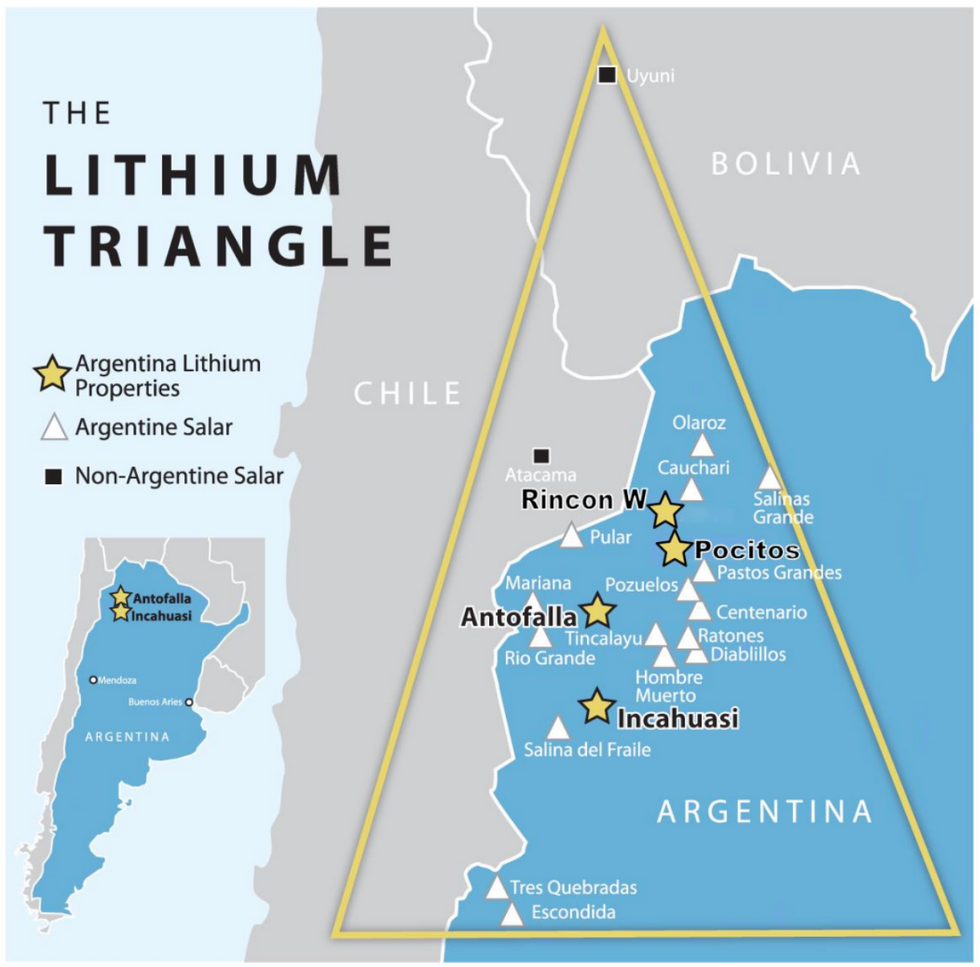 Argentina Lithium and Energy has a strong land position in Argentina with nearly 58,000 hectares of claims on four salars in the pro-mining provinces of Salta and Catamarca. The company’s properties are strategically located near key infrastructure, towns, rail, water and power. Argentina Lithium’s projects are also accessible year-round through an existing road network.

The company’s project portfolio includes Rincon West, Pocitos, Antofalla North and Incahuasi. In October 2021, the company announced that it signed a definitive agreement to acquire 100 percent interest in the highly prospective Rincon West and Pocitos properties in the Salta Province in Argentina. The agreement is pending approval on the TSX Venture Exchange. The projects are located in the most underexplored area of the Lithium Triangle with the potential to host the discovery of high-grade lithium brines. 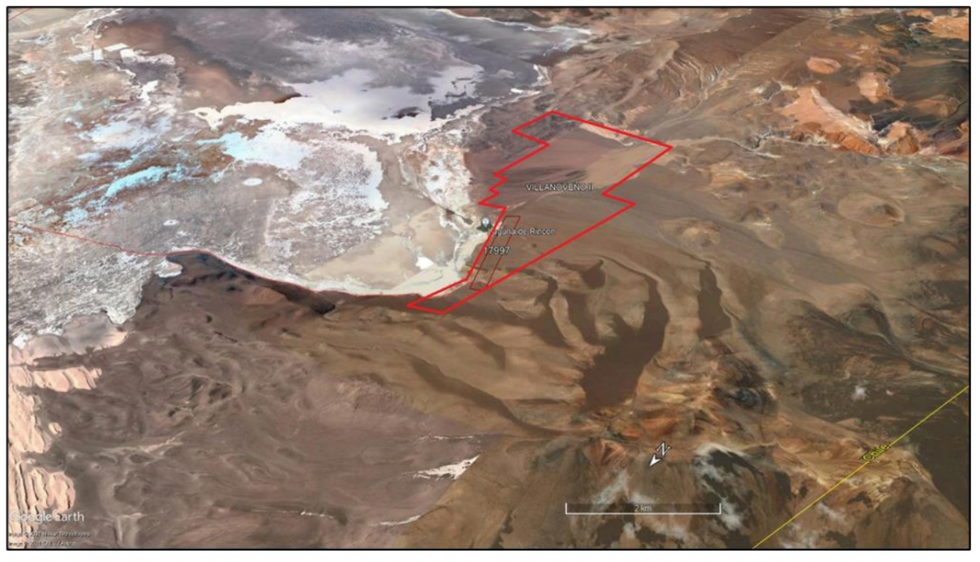 The company’s Rincon West project is located adjacent to two significant resource development projects with proven resources owned by Rincon Resources (ASX:RCR) and Argosy Minerals (ASX:AGY). The company believes that the Rincon West project may have the potential to host high-grade lithium brines.

The company’s fully-owned Antofalla North project is located in the Salta province less than 20 kilometres from Argentina’s largest lithium-producing operation at Salar de Hombre Muerto. The Antofallo North project is also located north of Albemarle Corporation’s (NYSE:ALB) Salar de Antofalla project which has grades of 350 mg/L of lithium and 6,400 mg/L of potassium. 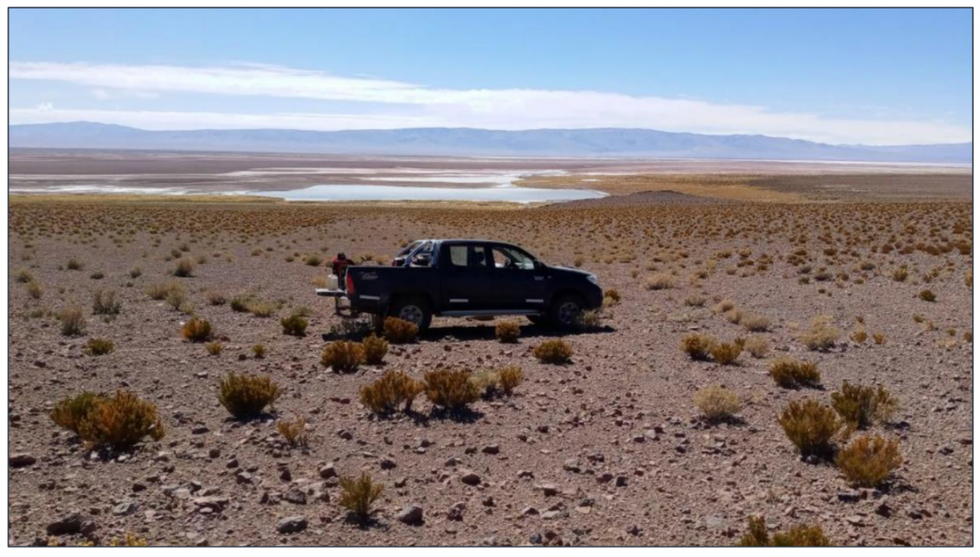 The Rincon West project is a prospective 2,370-hectare lithium project located in the Salta province in Argentina. The project is located west of the Rincon Salar which hosts two significant resource development projects with proven reserves. These projects are owned by Rincon Resources Ltd. (ASX:RCR) and Argosy Minerals Ltd. (ASX:AGY) which Rincon West is adjacent to.

The property is situated in the Lithium Triangle with access to an international highway, pacific ports and a major electrical power corridor.

Argentina Lithium and Energy plans to begin a work program in 2022 consisting of 40 line kilometre transient electromagnetic soundings to delineate lithium brines and test the bottom of the basin. Argentina Lithium and Energy believes that the Rincon West project may have the potential to host high-grade lithium brines. The company has the option to acquire up to 100 percent in the Rincon West project, subject to TSXV approval.

The Pocitos project is a prospective 15,857-hectare lithium project located in the Salta province in Argentina. The property is situated in the Lithium Triangle with access to an international railway, pacific ports, provincial highway and a major gas pipeline. 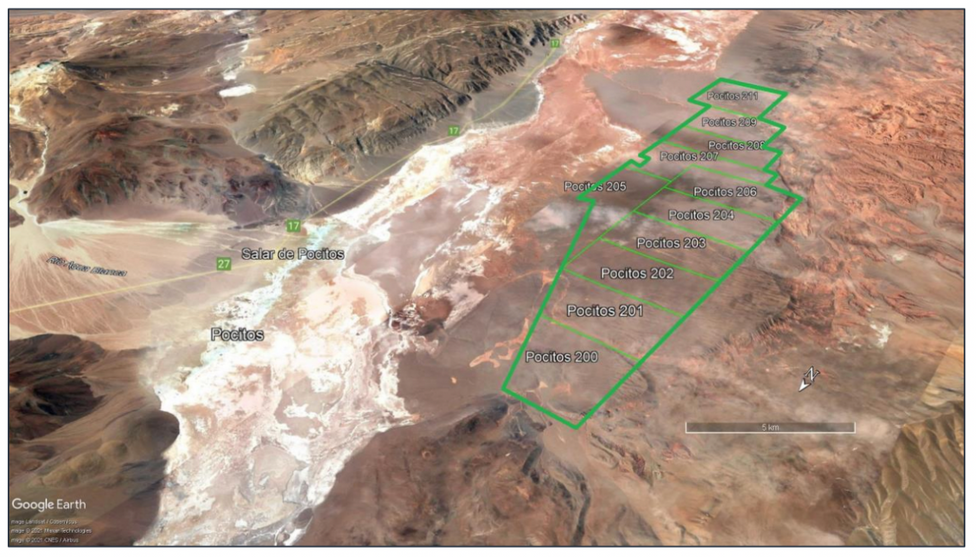 The company plans to conduct a 50 line kilometre line of transient electromagnetic soundings to detect and delineate brine concentrations for testing in 2022. The company has the option to acquire up to 100 percent in the Pocitos project, subject to TSXV approval.

The Antofalla North project is a prospective 9,080-hectare lithium project located in the Salta province in Argentina. The company owns a 100 percent interest in the property and has an additional 5,380 hectares under option.

The property is situated in the Puna region with access to a provincial highway and unpaved roads. The Antofalla North project is located less than 20 kilometres from Argentina’s largest lithium-producing operation at Salar de Hombre Muerto. The Antofallo North project is also located north of Albemarle Corporation’s (NYSE:ALB) Salar de Antofalla project which has grades of 350 mg/L of lithium and 6,400 mg/L of potassium. 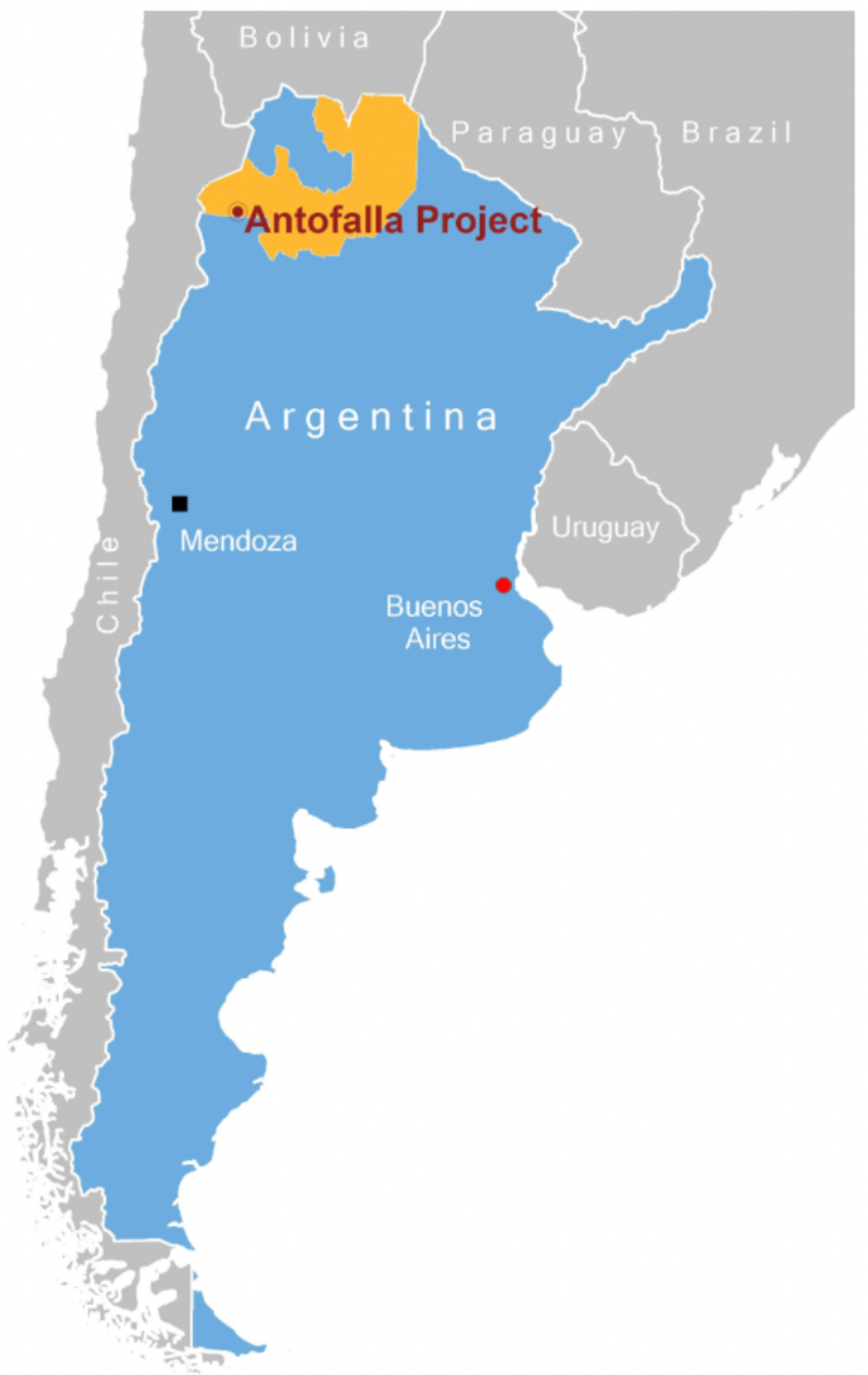 Argentina Lithium and Energy has conducted a CSAMT geophysical survey that identified high-conductivity targets in the upper 100 metres and additional targets at depth.

The company plans to obtain permits, conduct a 35 line kilometre of transient electromagnetic soundings to delineate brine deposits and drill up to three diamond holes in 2022.

The 100 percent owned Incahuasi project is a high-grade 25,000-hectare lithium project located in the Incahuasi Salar and basin in the Catamarca province of Argentina. The project is north of Lake Resources’ Kachi project.

The company plans to conduct a 50 line kilometre of transient electromagnetic soundings to detect and delineate new brine concentrations for testing. Argentina Lithium and Energy believes that the project is underexplored and may have the potential to host a quality lithium brine at depth.

Nikolaos Cacos has over 25 years of management and advisory expertise in the mineral exploration industry. He has worked with Grosso Group since its inception and serves as a senior-level executive for all of its member companies. Cacos’ career includes administration and strategic planning for public companies. He currently serves as an officer and director of several TSX Venture Exchange-listed companies. He holds a Master’s degree in International Management from Heidelberg, Germany and a Bachelor of Science degree from the University of British Columbia.

In recent positions, Rideout has directly managed the acquisition and exploration of dozens of lithium properties in northern Argentina. Previously, he served as CEO of Latin American Minerals Inc. (TSX:LAT) for 5 years in which he advanced gold and diamond projects in Paraguay. Rideout also spent 23 years with Quantec Geoscience Inc. where he initiated operations in South America and managed subsidiaries in several countries. He has experience in mine permitting, financing, construction and operations, including implementing the first operating mine in Paraguay. In addition, Rideout has deep expertise with all major geophysical technologies applied within the mining industry. He also has decades of experience working with many of the most successful exploration teams in South America. He participated in the discovery of several world-class deposits including the Collahuasi and Ujina copper-porphyry deposits, Veladero epithermal gold deposit and Navidad VMS/epithermal silver deposit. Rideout received a Bachelor of Science with Honors Certificate in Geophysics from the University of Western Ontario in 1987. Rideout is fluent in English and Spanish and has lived in Mendoza, Argentina for more than 20 years.

Connie Norman is a senior corporate officer with over 18 years of experience within the public company sector. Norman has provided corporate secretarial and regulatory compliance services. While her primary focus has been on TSX Venture-listed issuers, she has also worked with companies listed on the TSX and HKEx.

Darren Urquhart is a chartered professional accountant with 20 years of experience working in public practice and industry. Urquhart operates his public practise accounting firm in which he offers chief financial officer and accounting services to TSX Venture Exchange-listed companies in Vancouver, Canada. He has also served as director for some of his corporate clients. Urquhart began his career working as an audit accountant with Grant Thornton LLP. Later he worked as a senior tax accountant with Lohn Caulder Chartered Accountants. Urquhart obtained his chartered accountant designation in 2001 and is a member of the Chartered Professional Accountants of British Columbia. In 1995, Urquhart graduated from the University of British Columbia with a Bachelor of Applied Science in Electrical Engineering.

Joseph Grosso became one of the early pioneers of the mining sector in Argentina in 1993 when mining was opened to foreign investment. He was named Argentina’s ‘Mining Man of The Year’ in 2005. His knowledge of Argentina was instrumental in attracting a premier team that led to the acquisition of key properties in Golden Arrow’s portfolio. He has successfully formed strategic alliances and negotiated with mining industry majors such as Barrick, Teck, Newmont, Viceroy (now Yamana Gold) and Vale S.A. and government officials at all levels. Grosso’s specialty is financing, negotiations, corporate and marketing strategy. He was an early and passionate adopter of best practices in environmental protection and socio-economic development through mineral exploration. He is the founder and president of Grosso Group Management Ltd.

John Gammon has 40 years of experience in mineral exploration and management. His experience includes international positions with Falconbridge, assistant deputy minister mines and minerals with the Government of Ontario and, since his retirement, as ADM as a consultant working with industry, governments and universities. In addition to Dr. Gammon’s mineral exploration experience, he has also spent a significant amount of time on aboriginal community and environmental issues. His knowledge of the Spanish language, South American culture and local societies coupled with his industry experience can assist the company with the advancement of its projects in Argentina.