I always start these eco-friendly concrete articles with a reminder of how environmentally unfriendly normal concrete manufacturing is, because it really can’t be overstated.

First up, concrete is the second most used material on the planet, after water. If it was a country, it would be the 3rd biggest producer of industrial CO2 emissions in the world. And don’t forget how much concrete production has ramped up these last few years. In between 2014-2016, China produced more concrete than the US did in the entire 20th century.

And it’s not just the manufacture of concrete that is environmentally unfriendly. Concrete is great in compression, but lousy in tension or bending or torsion, and so often requires the addition of steel rebar, which itself is labour and energy intensive to manufacture and install.

As you can see, the environmental aspects of concrete production as a whole could do with some disruption.

A team of researchers at UC Berkeley have been working on one angle which may reduce the environmental impact of concrete production that involves using 3D printed plastic internal structures in place of the rebar. How will this help? Read on.

First up, how does the process work?

Simply, a support geometry (like a lattice) is printed with filament deposition 3D printing, and the lattice is placed into a pouring mould. The team experimented with ABS and PLA polymers. Next, an ultra high performance concrete (UHPC), is poured into the mould, covering the plastic structure, just like a rebar. You can see the lattice below. 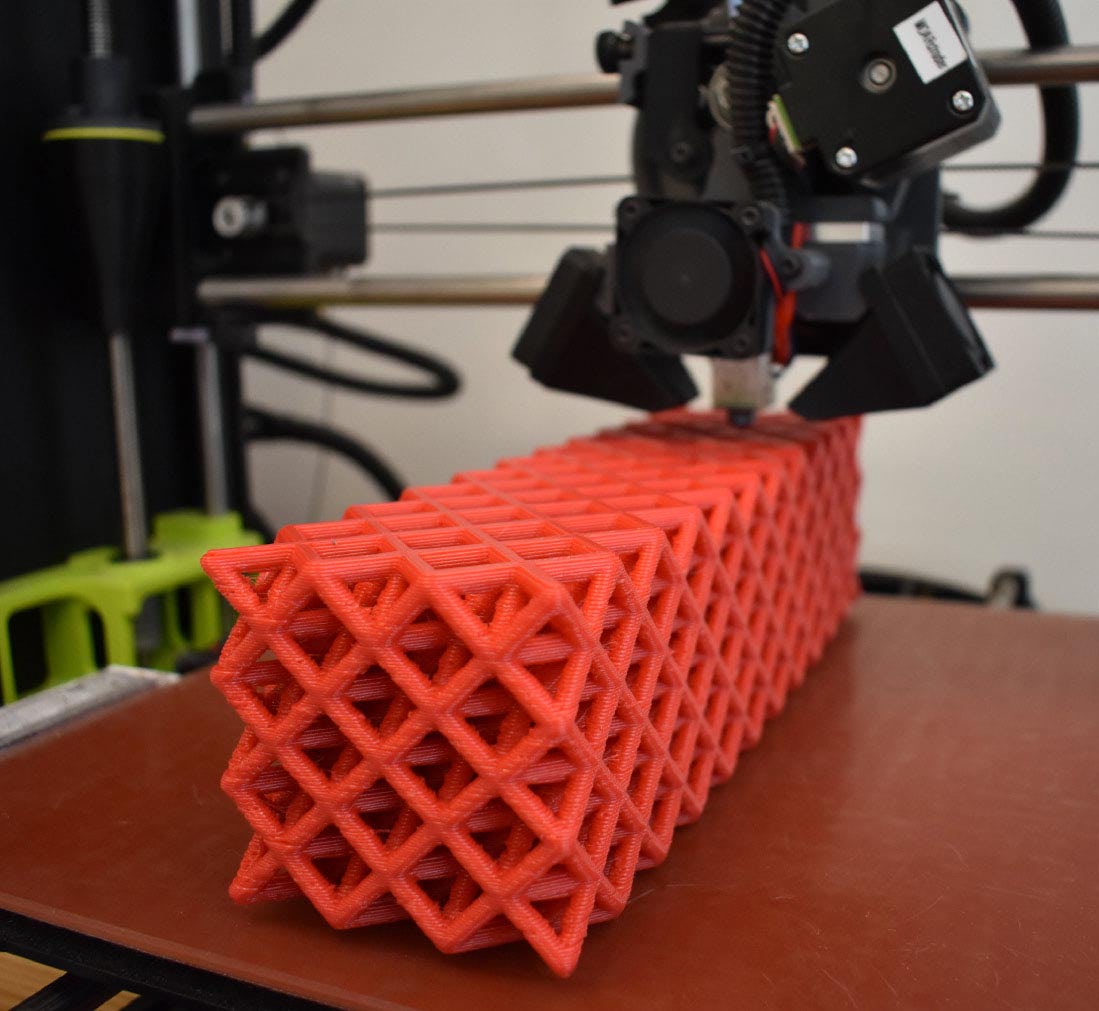 You can see UHPC being poured inside the mould and covering the lattice in the image below. The finished product just resembles a normal block/slab of concrete, except with the benefit of reduced labour involved in laying up rebar, tying it together with wire, and all the rest of it. All of this manual labour is now reduced to a CAD file and a few button clicks. And that’s not to mention the environmental benefits of polymers over rebar. 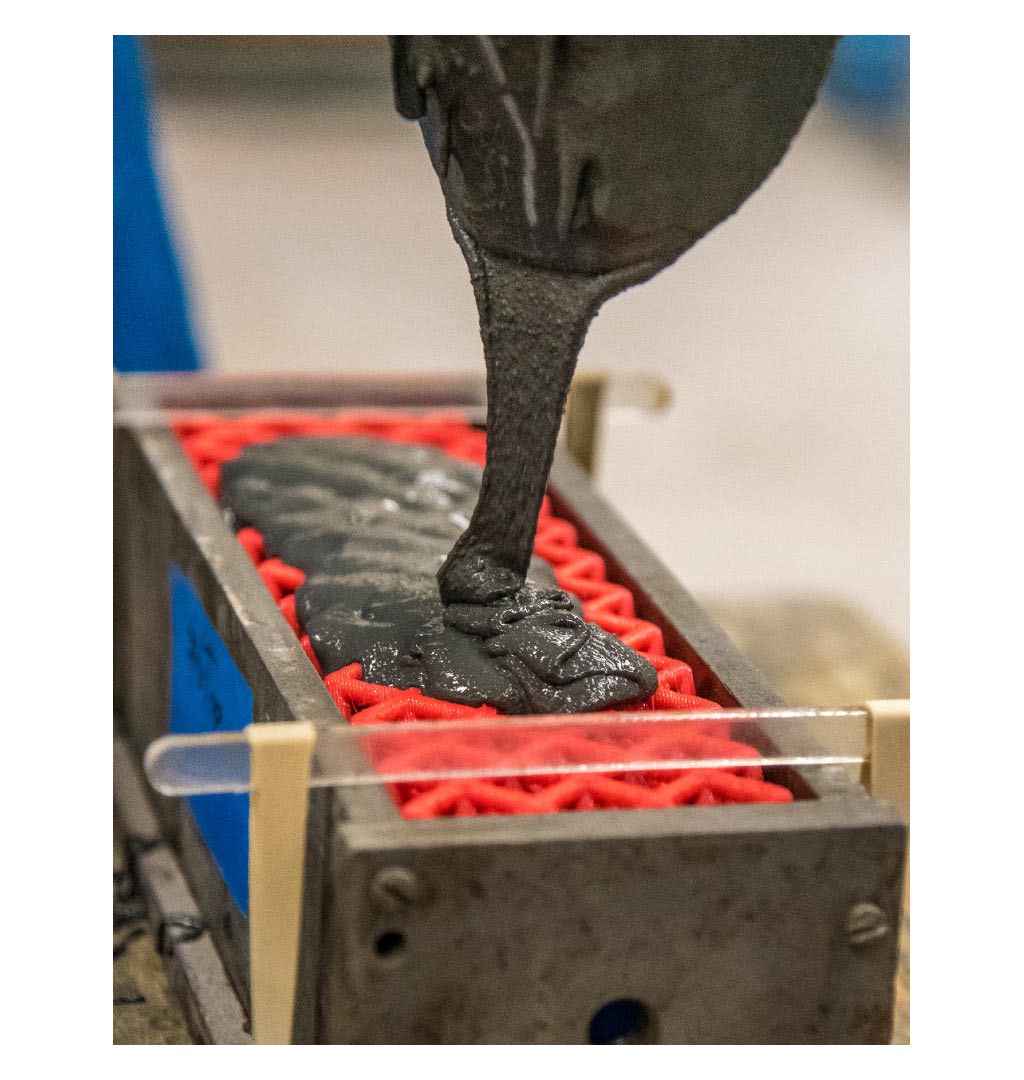 “In contrast, there is a conceivable route toward polymers that are net carbon-neutral or even potentially carbon-negative through the use of biopolymers, recycling and renewable energy sources.”

By digitally manipulating the geometry of the lattices in the CAD/simulation stages, concrete pieces can be optimized to have greater strength resilience in all directions (isotropic, instead of anisotropic)), and in addition, the lattice can reduce crack propagation.

With traditionally manufactured polymer-matrix concretes, the fiber distribution is uneven, and can cause routes for cracks to propagate. The deposition of the polymer is CNC controlled, and so the crack behaviour can be better predicted and the mesh can be designed to “nip it (the crack) in the bud”, as it were.

“Cracks are very clever,” said Claudia Ostertag, professor of civil and environmental engineering at UC Berkeley. “They will choose the path of least resistance. However, in this case the cracks are no longer able to avoid the reinforcement due to its uniform 3D arrangement.”

And of course, being in wonderful Industry 4.0, there are many tools available to assist with the optimization of these lattices.

Topology Optimization can be used to create even lighter structures, capable of carrying the same loads as heavier, bulkier (over-engineered) structures. The requirements could be fed into a Generative Design software, and various statistical methods of experimentation and AI could even lead a hand in optimization.

“Going forward, my biggest question is how to choose the best lattice structure for a particular application,” said Brian Salazar, lead author of the research paper released recently. “There could be even more optimal geometries waiting to be found.”

3D print your own car parts