Metal and plastic hybrid 3D printing has long been the aim of those wishing to print PCBs and rudimentary electronic components, such as strain gauges, resistors, basic transistors and maybe even three dimensional PCBs.

A research team from Japan has come up with a novel way of adding conductive tracks onto 3D geometries utilizing a filament based printing approach.

The team, from Waseda University, has used a dual extruder nozzle system loaded with a standard ABS filament and an ABS combined with palladium chloride (PdCl₂), which you may recognise if you work in electroless plating circles.

“Even though 3D printers let us create 3D structures from metal or plastic, most of the objects we see around us are a combination of both, including electronic devices,” said Professor Shinjiro Umezu, leader of the research at the university.

“Thus, we thought we’d be able to expand the applications of conventional 3D printers if we managed to use them to create 3D objects made of both metal and plastic.” 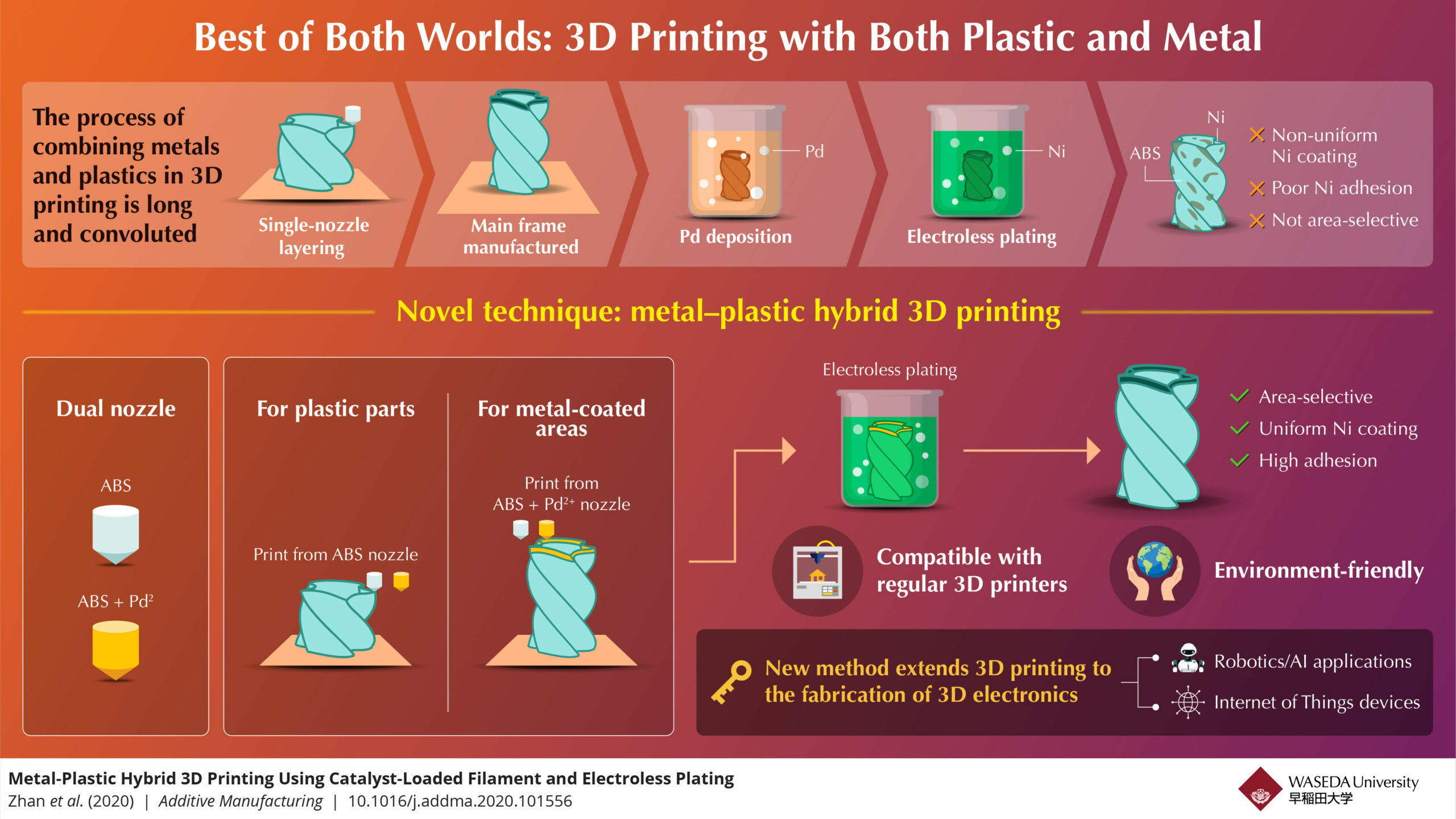 There are many ways of metal plating plastics, ranging from vapour deposition techniques to electroplating. They range in cost and complexity and generally speaking, the better processes cost a lot more and require very expensive equipment. Many vapour deposition type methods require vacuum for example.

Electroplating is seen as a cost effective method largely due to the minimal capital required to get a system established. You simply need a bunch of chemicals, various vats for etching, cleaning and plating, and some electricity. The problem is, plastics aren’t especially conductive. Even the conductive filaments are orders of magnitude less conductive than metals such as copper. You can read more about those filaments in our conductive materials article.

Electroless methods for plating plastic typically submerge a plastic in a palladium bath to provide a good substrate for the plate to adhere to, using the palladium as a catalyst for plating. They rely on the electrochemistry of the chemicals, rather than electricity itself.

In this method, the metal ions in the electrolyte bond with the palladium. The problem is, using this method can be a little unpredictable in terms of the end result. Weird geometries can create nooks and crannies that the electrolyte cannot get into, and features such as corners can cause the fluid to accumulate, causing a bulbous, curved plate finish (similar to how electroforming works, except undesirable in this case).

The new approach uses the two filaments previously mentioned (ABS and ABS doped with PdCl₂) allows selective layerwise deposition of the palladium compound by alternating between the two nozzles. The final printed part can then be dipped in the electroless vat, and metal (typically nickel for electroless plate) can be deposited in the preferred locations, leaving the non-conductive ABS as insulating material between the plated tracks. Additional metals can be plated on top of the formed metal tracks using normal electroless or electroplating methods.

Another benefit of this method is that it does not require any etching at all, which is great because etching typically requires strong acids, which aside from being a handling hazard, can actually destroy the surface of parts if not performed correctly.

“Our hybrid 3D printing method has opened up the possibility of fabricating 3D electronics so that devices and robots used in healthcare and nursing care could become significantly better than what we have today,” said Umezu.

The Impact of 3D Printing in the Automotive Industry

Organizational impact of 3D printing technology in surgery: which criteria to evaluate?